Mother Clelia’s face is restful and serene, full of tenderness as the one who loved and entrusted her life fully to the Sacred Heart of Jesus.

Mother Clelia, foundress of the Apostles of the Sacred Heart of Jesus, was born in Forli, Italy, on March 10, 1861. Now, 88 years since her death in 1930, her body was found to be intact.

On April 23, a Vatican team, composed of doctors and members of the Church, together with the members of the General Council of the Apostles of the Sacred Heart of Jesus, re-exhumed the body of Mother Clelia Merloni, buried inside the church dedicated to St. Margaret Mary Alacoque, at the Generalate in Rome, Italy.

Vatican experts found her body to be intact, 72 years after the first opening of her coffin. A body in the state of incorruption is considered a sign of holiness and has no scientific explanation.

The faithful and those devoted to Mother Clelia can visit her body, which rests in the Chapel of the General House in Rome.

The process of designing the coffin for Blessed Clelia Merloni was governed by the desire to create a design that meets the following requirements: enhancement, conservation and use of the relics of Blessed Clelia. 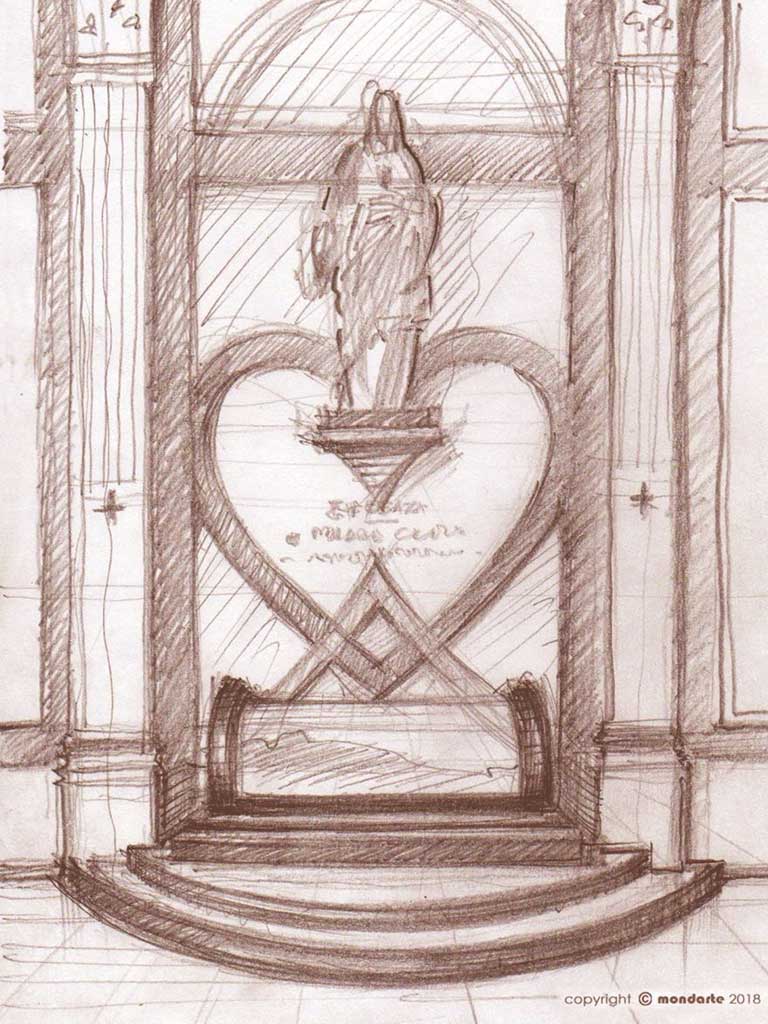 From a formal, aesthetic point of view, we thought of a coffin-reliquary that would fit harmoniously into the architectural space designated for it, giving maximum emphasis to the figure of Mother Clelia so as to be adequate and viable for veneration by the faithful.

Also the work of redesigning the wall that serves as background to the coffin was conceived from this perspective.

In fact, in addition to symbolically and explicitly highlighting the strong bond between Mother Clelia and the Sacred Heart of Jesus, the proposed design is also the result of careful analysis of the interior of the Chapel, deliberately taking into consideration those shapes, colors and materials which are already present in the sacred furnishings and wall coverings of the liturgical space.

Regarding the best way to protect the relics of Blessed Clelia and specifically in order to slow down and minimize deterioration due to unsuitable environmental causes (humidity, temperature, growth of microorganisms), the coffin was hermetically sealed, airtight, and is equipped with a passive system for stabilizing the internal microclimate through the use of special preconditioned silica gels.

The creation of the glass coffin of Mother Clelia Merloni together with the statue of the Sacred Heart and the inlaid marble wall that is integral to the design must be considered and understood as a single entity.
Essentially, the statue of the Sacred Heart of Jesus, placed above the coffin containing the sacred remains of Blessed Clelia, represents the focal point and goal of the life of Mother Clelia, the One to whom she gave her entire life.
At the top of the marble wall that serves as background, we find a large heart that seems to embrace the statue of Jesus, and below a kind of triangle characterized by two symmetrical lines arising upwards from Mother Clelia’s coffin symbolically representing two hands joined in prayer that meet in contemplation, drawing the onlooker’s gaze towards the Sacred Heart.
The stylized heart and triangle are two complementary forms: they seek and meet each other, just as the marriage of day and night.
It is the meeting between beauty and contemplation. In the space created by the meeting of these two forms, the cross is placed deliberately on the heart of Christ above the coffin. In Mother Clelia’s spirituality, the cross represents the meeting place with Christ. It is in that cross that Clelia’s heart is united with the heart of Christ. It is in the cross of Christ that she finds her safety, protection and refuge.
At the base of the golden heart resting on coffin, amidst branches and leaves in gilded metal there are several stalks of wheat depicting Mother Clelia’s humility and her self-offering to the Sacred Heart for the conversion of sinners and for the life of her Congregation: “Unless a grain of wheat falls to the ground and dies, it remains just a grain of wheat; but if it dies, it produces much fruit” (John 12: 24)
Mother Clelia’s face is that of woman between 45 and 50 years of age, the years of the beauty and maturity of her charism, and her peaceful expression on her face captures her contemplation of the purity and holiness of God. Hers is no longer a face beholden to the moment of death, but of the Resurrection, according to her charism.
Finally, the positioning of her two hands was intentional.
One tightly grasps the crucifix on her chest and the other is open to the Constitutions and points to the interior life;
One hand receives Christ and the other offers the Charism. This represents the beauty of prayer and the concrete action of charity.

The coffin is placed on an altar. The altar in the biblical conception is the place of offering and sacrifice. In this sense Mother Clelia has become a loving offering to the Lord and at the same time she makes an offering with Jesus in reparation for the sins of humanity. The spirituality of the Sacred Heart of Jesus is expressed in offerings of praise to God, and in this sense the offering of Mother herself acquires meaning and value in the Eucharistic Celebration because she offers herself with Christ, in Christ and for Christ.
The two bare feet show that her body is complete. The feet are moving and represent the life of the Apostle who is always on a journey and in a hurry to bring to everyone on the “streets of the world” the Gospel of Love and forgiveness.