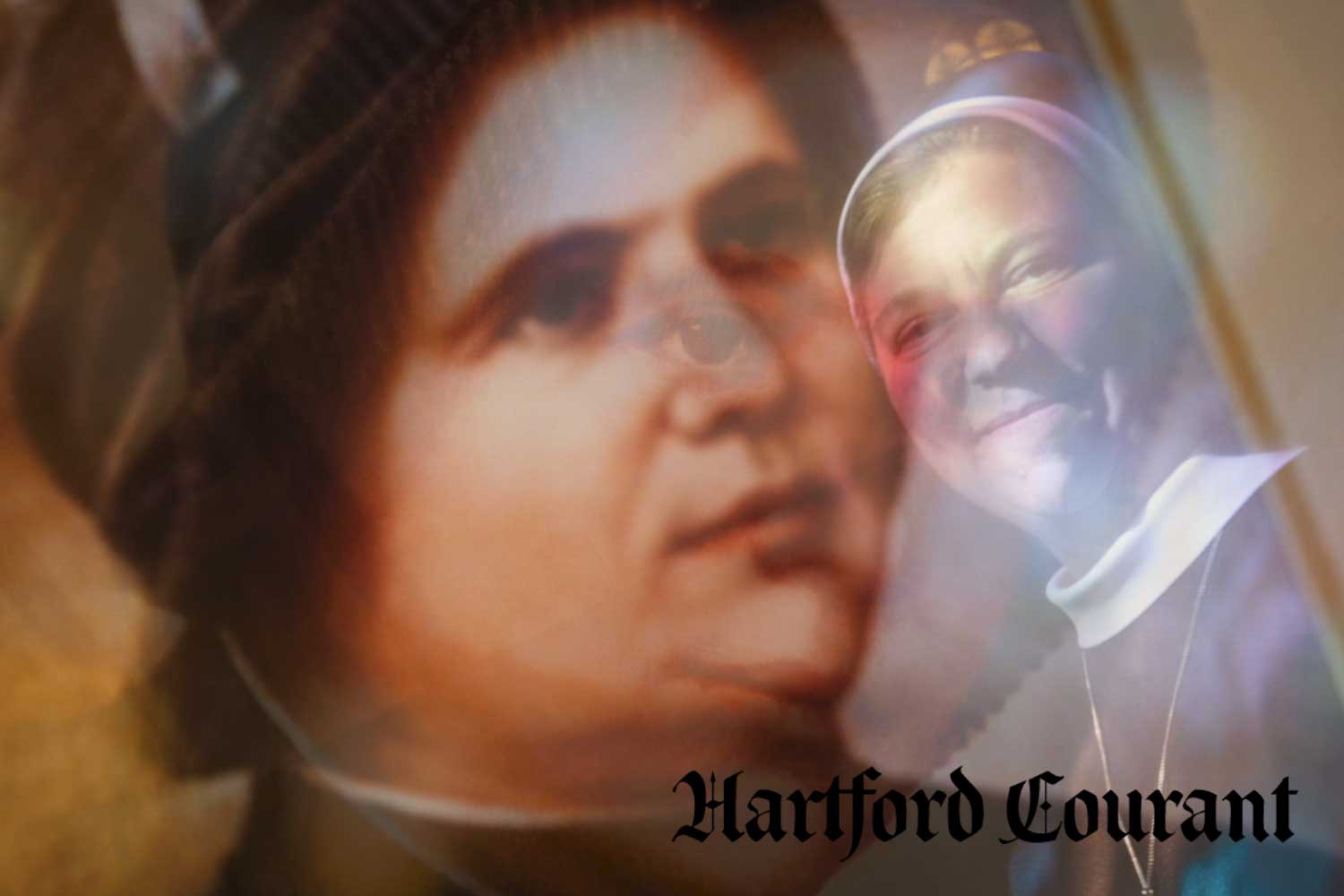 Between family tension, health issues, a destroyed reputation and exile from the community of Roman Catholic nuns she helped found, Clelia Merloni could have easily given up.

But instead, Merloni bore those trials quietly and without complaint and chose to love those who persecuted her.

It’s one of the reasons the nuns of the Hamden-based religious community, the Apostles of the Sacred Heart of Jesus, say their founder is on the path to sainthood. And it’s why Pope Francis on Jan. 26 approved the first miracle attributed to Merloni’s intercession, clearing the way for her beatification — the final step before the Catholic Church’s formal recognition of sainthood.

During a recent interview at the Apostles’ convent, Mount Sacred Heart, Sister Virginia Herbers, vice provincial for the order’s U.S. province, said Merloni’s story is one that all people — Catholic or not — can learn from.

“It’s not just that hard things happened to her,” Herbers said. “Hard things happen in everybody’s life … but the real spotlight on her — and the reason for her beatification, and the reason that we’re so excited that she is being beatified — is because the way she handled those difficulties was something we can all learn from. She had a great deal of hardship and suffering in her life and her response to it, across the board and consistently, was always to receive it in the best light possible, to entrust it to the Sacred Heart [of Jesus] and believe that he was going to take care of her regardless, and to hold steady to the truth.”

The decision comes 28 years after church officials opened her cause for canonization in 1990.

The real spotlight on her … is because the way she handled those difficulties was something we can all learn from.
— Sister Virginia Herbers, vice provincial, Apostles of the Sacred Heart of Jesus

Herbers said because of the six-hour time difference between Hamden, the headquarters of the order’s U.S. province, and Rome, the news came early in the morning Feb. 3 and slowly reverberated throughout their community. She said there was “total rejoicing all across the province” that morning, with nuns skipping through the hallways and cheers erupting through the community’s retirement home when the news was announced over the public address system.

In a written statement, Archbishop Leonard P. Blair of the Archdiocese of Hartford said: “The anticipated beatification of Mother Clelia Merloni comes as very joyful news to me and all the many people in our archdiocese who know and love the community she founded, the Apostles of the Sacred Heart of Jesus. We are blessed to have these sisters in our archdiocese and we join them in giving thanks to God for the life, work and heavenly intercession of their foundress.”

Beatification is the final step before a person is canonized, or formally recognized as a saint in the church.

The canonization process typically begins five years after someone has died. During the first phase, the person is given the title “servant of God” and church officials begin collecting testimony and documenting the person’s life. Once a candidate is determined to have lived life with “heroic virtue,” they are declared “venerable.”

Herbers said little was known about Merloni’s life until the Second Vatican Council’s push, beginning in the 1960s, for religious orders to rediscover their roots. Even more details were uncovered during the research for Merloni’s canonization.

Merloni was born in Italy in 1861 and founded the Apostles in 1894. Merloni’s inspiration for the order came when she was dying of tuberculosis.

“On her death bed, [Merloni] said to one of the priests, ‘I believe the Sacred Heart is calling me to found a congregation dedicated to him,’ ” Herbers said. “[The priest] said, ‘We’re going to pray a novena’ — a nine-day set of prayers — ‘for that intention and if, at the end of that novena, God wants you to found a congregation dedicated to the Sacred Heart, you’ll recover and if he doesn’t, then you’ll meet him face to face.’ ”

Merloni was fully recovered at the end of the nine days and received permission to found the order.

Translated from Latin, the Apostles’ motto is, “The Love of Christ Impels Us.” Its main mission is “sharing the love of the heart of Christ,” Herbers said.

“It doesn’t limit us to any specific ministry or any specific work,” Herbers said, “but rather opens us up to be able to go out to the ends of the Earth … to spread the love of Christ to anyone who might be in most need of it.”

Herbers said a significant component of the order’s devotion to the Sacred Heart is reparation, which is “tending to the brokenheartedness of all those we encounter.”

“For Mother Clelia, she tended to the broken heart of Christ by offering forgiveness to those who hurt her [and] by recognizing [that] … anything done to her … was an opportunity to demonstrate greater love,” Herbers said.

“For us as apostles, we extend that understanding of reparation to an ability to tend to the brokenhearted in ministry, so we’re always looking for the broken heart of Christ out there in the people we serve.”

Today, the order’s primary focus is education; the order operates four Catholic schools in Connecticut, including Sacred Heart Academy, which shares its campus with Mount Sacred Heart convent on Benham Street in Hamden.

[Mother Clelia] tended to the broken heart of Christ by offering forgiveness to those who hurt her.
— Sister Virginia Herbers, vice provincial, Apostles of the Sacred Heart of Jesus

Merloni’s reputation was destroyed in the early days of the community after a priest entrusted to handle its finances ran away with the money, leaving the Apostles penniless. Merloni, not wanting to further the existing anti-Catholic sentiment in Italy at the time, refused to incriminate the priest and was subsequently blamed for the fallout, Herbers said.

Later, internal division led to Merloni’s removal from leadership and exile, in which she was permitted to remain in the community but nuns were forbidden to interact with or acknowledge her. She lived in the community for five years, but eventually requested and received a dispensation from her religious vows and left. Merloni’s exile lasted 17 years.

Merloni was welcomed back to the community for the last two and a half years of her life. Her body was exhumed in 1945, 15 years after her death, because the cemetery where she was buried was destroyed in World War II and the order sought to bring Merloni’s coffin back to their general house in Rome. Merloni’s body was then found to be incorrupt, meaning that there was no physical decay present.

It is also common practice in the church to exhume a person’s body before or during their cause for canonization, to ensure the correct body will be venerated by the public and also to check for incorruption.

Herbers said leaders in the community decided to pursue canonization for their founder because of her resilience in the face of heartbreak.

“The whole story behind Mother Clelia and who she was in the congregation was starting to come to light, and for all the difficulty and trial and devastation and tragedy that she endured during her lifetime that would very well have made the rest of us either angry or depressed or resentful, the only response she ever had was that of generosity, that of total trust in God and true love for the people who were actually doing harm to her,” Herbers said.

Once a candidate has been declared “venerable,” two miracles must be attributed to their intercessory power. The miracles are evaluated by the church’s scientific commission, which uses specific criteria to determine whether there is a natural explanation for the alleged miracle.

“For people of faith, [a verified miracle] demonstrates that the individual … is still very much alive and well, very much active in our lives, and is interceding for the needs of those who are asking for her help,” Herbers said.

The approval of each miracle signifies a separate step in the canonization process, advancing the individual’s title from “venerable’ to “blessed,” and then from “blessed” to “saint.”

A person is only canonized after the requirements of all phases are met.

In the case of Merloni, Pedro Angelo, a Brazilian doctor, was diagnosed with Landry’s paralysis, or Guillian-Barré syndrome, in 1951. According to a written statement from Mother Miriam Cunha Sobrinha, superior general of the Apostles, the disease quickly worsened to the point where Ângelo could barely swallow, and it was deemed fatal.

Angelo was completely cured after drinking from a cup of water in which a relic of Merloni had been placed. Relics are items that once belonged to a holy person and are held in reverence by the faithful; in this case, a piece of fabric from Merloni’s veil.

Angelo died in 1976 of cardiac arrest, 25 years after having been cured of the paralysis.

A ceremony will be held in Rome at the Basilica of St. John Lateran. A date has yet to be determined. Herbers said while many nuns will be in attendance, those who can’t make the trip to Italy will take part in local celebrations around the world.

“Here was this person that lived a relatively hidden life that we wouldn’t know about, except for the fact that her story was resurrected and the truth has come out,” Herbers said. “She died with negativity all around her. Her story is a story for all people. It’s a story of having family tension, tension with the people you love, with people who should have your back, and all of that never really coming to justification. The normal person can look to her and say, here’s an example of a person who’s now spotlighted, let me take a look at her life and see what I can learn from it.”