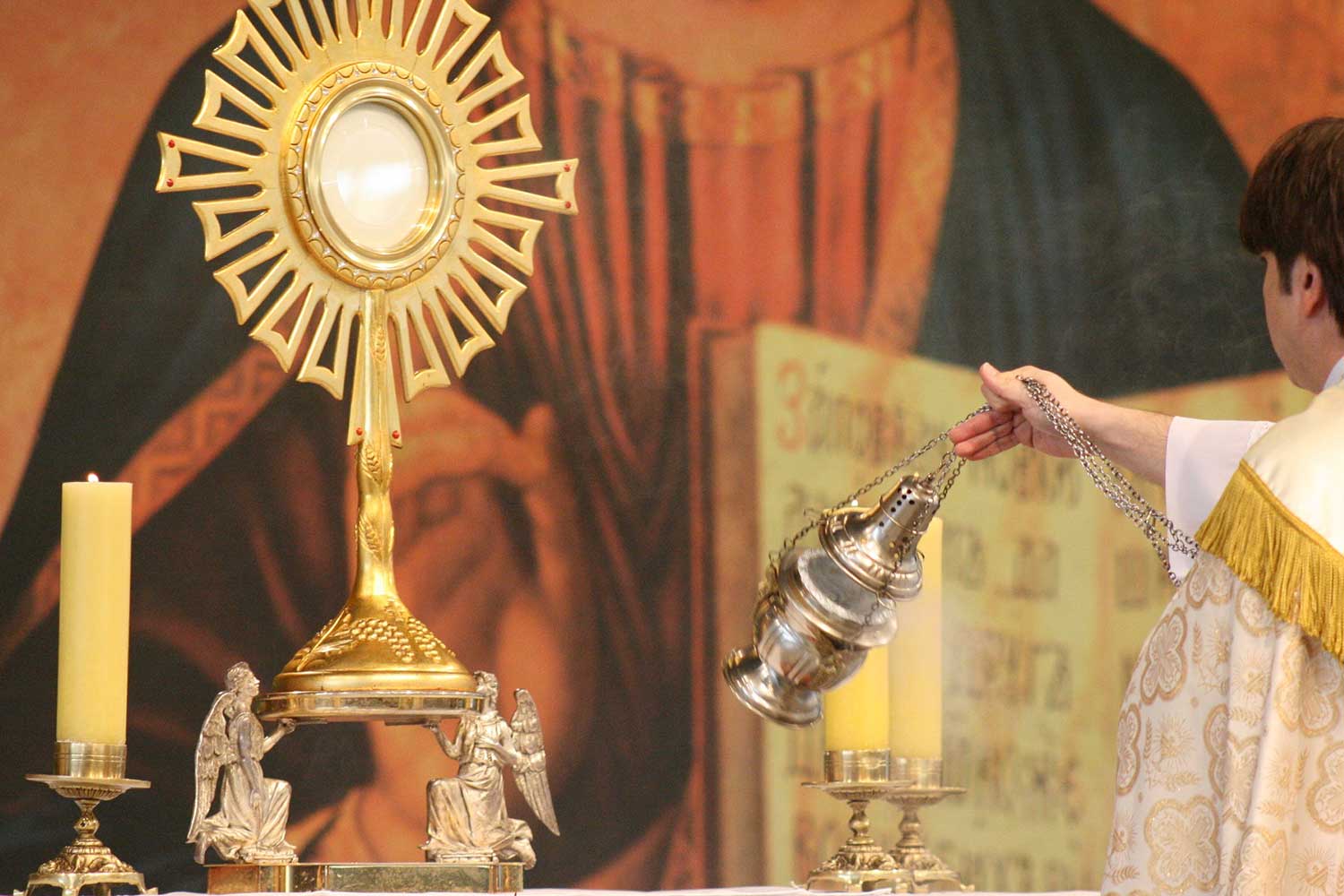 ”I leave you at the feet of Jesus in the Blessed Sacrament so that you may pour out to Him your sorrows, your fears, your desires, and all the intensity of your love.” (Mother Clelia)

Her devotion to Jesus in the Eucharist

Mother Clelia was able to grasp the intensity of the unique presence with which Christ comes to meet His people. She allowed the divine Sacrament to mark her days, filling them with trusting hope, giving life to every endeavor, illuminating every darkness, and curing every wound. Her Sisters unanimously remember how their Mother’s gaze was continuously turned toward her Lord present in the Sacrament of the altar, in which she discovered the full manifestation of His immense Love:

“Madre Clelia loved the Eucharist: her soul spontaneously leaned toward the Tabernacle, of which she had been deprived during [some of] the time of her sorrowful exile. She wrote that she found ‘a place of His delights” once again [upon her return to] the Generalate, and her life from 1928 until her death was eminently Eucharistic.”

“She did not let herself be discouraged by the adversities of her life because it was enough for her to remain in adoration before the Blessed Sacrament for some time in order to fill her soul with hope and joy. At times, perhaps after difficult situations, she took refuge in the Chapel, and many elderly Sisters who saw her make reference to the fact that they had to shake her to get her to respond because she was immersed in contemplation of God and she remained in Him as in profound ecstasy.”

“She had a great veneration for the Blessed Sacrament. She would often get up, even during the night, to pray in the balcony, and was vigilant to be sure the sanctuary lamp was always lit.”

Venerable Mother Clelia had a great love for her spiritual daughters and although she was nearing the end of her earthly days, from high in the balcony off her room, with a sweet and secure voice, she guided the evening encounter with Jesus.

A witness recounts:
“Each evening, right after supper, our little group of postulants went to chapel for a brief visit to Jesus in the Blessed Sacrament, staying in the last pew. Mother, who usually prayed in balcony overlooking the altar, heard us pray. After a few evenings, in the twilight of the chapel, we heard her call to us lovingly: “Daughters! Why way in the back? Jesus wants us close to him to speak heart to heart; He loves you very much.”

Each Thursday night, during the hour of adoration before the Blessed Sacrament, she always joined with the Novices from the balcony on the second floor where her room was, and suggested the intention for the Holy Hour.

Even young people remained impressed with her love for the Eucharist. One witness, who was an adolescent when she knew Mother Clelia in Roccagiovine, remembers:
“On Sundays, [Mother Clelia] came down to Church for mass, but before going back home, she stayed for hours in adoration near the tabernacle. She prayed much; she was a true soul of prayer who impressed me very much.”

“…If today I love prayer it is because I learned it more from watching the Servant of God in deep prayer than from any instruction I received. Everyone spoke about the “holy Mother” and I was happy to be able to see her close up in order to imitate her. I used to believe that the saints were all like she was here on earth. Not only did I learn from the Apostles of Mother Clelia to write, to work and to pray, but I learned love of reading the Lives of the Saints and love of prayer before the Blessed Sacrament.”

Her devotion to the Sacred heart of Jesus

Mother Clelia was attracted to veneration of the Sacred Heart, cultivated and diffused strongly in the Church of her time, and she made Jesus the King and Center of her love. She understood that devotion to the Heart of Christ was not intended to be known coldly as a mere intellectual teaching, but rather to be lived and incarnated in one’s own life.

A witness affirms:
“The motto of our dear Mother is: “God Alone”; she was in love with God. All her life was centered in the Love of the Heart of Jesus, in reparation. God alone was the purpose of her life and the exercise of her virtues. She was never satisfied with what she did for Jesus and would have done even more, but obedience tempered her actions and she obeyed wholeheartedly and with a smile.”

Certainly, Mother Clelia was familiar with the words addressed by Jesus to St. Margaret Mary Alacoque in the great revelation of 1675: “Behold this Heart that has so loved humanity but has received nothing but ingratitude in return.” She was so deeply touched by these words that she offered herself totally to the Heart of Jesus, loving Him above all else and proposing to her daughters: “May the Heart of Jesus be our all!”

One witness offers an important reflection:
“Her spiritual makeup can be summed up in the fact that she was a willing victim of the Sacred Heart of Jesus, for Whom she lived and to Whom she dedicated her Congregation.”
Precisely because she lived totally for the Sacred Heart, Mother Clelia, having experienced in her life a rapid succession of trials, sufferings, misunderstandings, hostilities, all the while having leaned trustingly only on Him, could suggest to her daughters: “When the tempest rages, take refuge in the recesses of the Heart of Jesus and console yourself with that hope that His promises will flourish forever in every pious soul.”

Aware that devotion to the Sacred Heart must be “the first and most cherished of all devotions,” she exhorted the Apostles to engrave in gold letters in their souls the Twelve Promises of the Sacred Heart to St. Margaret Mary. Particularly dear to Mother Clelia was the first promise: “I will bless every house where a picture of my Heart is exposed and honored.” This promise moved her, in fact, to take on an apostolate to families.

A witness recounts that, as a child, she lived with Mother Clelia in the last years of her exile:
“The devotion that she had for the Heart of Jesus was great and she used to always say that you must have faith and pray to the Lord. She passed on this devotion to me; in fact, when I got married, I bought a framed picture of the Sacred Heart and put it on the nightstand with a lamp always lit. A proof of His presence would be the day I gave birth to my first son. It was a difficult birth; I remember the midwife leaving the room to ask my husband to call the doctor, and I was left alone praying to the Sacred Heart, who helped me, and everything worked out for the best.”

Moreover, since the Congregation she founded was dedicated to the Sacred Heart of Jesus, this concept appears very, very often in her daily language.

Two witnesses recount:
She sought to nourish and intensify the Christian life through devotion to the Eucharist and the Most Sacred Heart of Jesus, so much so that she named the Institute “Apostles of the [Sacred] Heart of Jesus.”

“Mother Clelia was very devoted to the Sacred Heart of Jesus and spoke of Him to whoever came to visit her: she urged them to go to Church to visit Jesus who, for love us, remained in the Tabernacles.”

In the writings and teachings of Mother Clelia, the Eucharist and the Sacred Heart are two inseparable concepts. Her desire to make reparation for the offenses inflicted on Jesus, who was crucified for His immense Love for humanity, made the concept of becoming a “victim” for this cause very vivid and meaningful to her.

A witness expresses it this way:
“Mother exhorted us to gaze at the tabernacle….to make frequent visits each day to the Eucharistic Jesus, “that prisoner of His great love.” She explained to us that our visits must make up for the indifference of those who neglect him.”

Her participation in the mystery of the Eucharistic Christ fortified her unique love toward her neighbor, gave her the courage to carry on her work, granted her the strength to endure numerous rejections that occurred at the time of her Congregation’s foundation, and formed her into an extraordinary person, endowed with many virtues and a noble and generous soul.

To think about:
1. What strikes you the most about Mother Clelia’s attitude toward the Eucharist? Toward the Sacred Heart of Jesus?
2. Am I aware of the presence of Christ in each person, that is, everyone who makes up the mystical Body of Christ?
3. The inscription on Mother Clelia’s tomb reads, in part: “The poor, the oppressed, the unfortunate were her most tender heartbeat.” Does my heart beat with the love and light of the Heart of Christ…for the Body of Christ?
4. Propose to make a daily visit to Jesus in the Blessed Sacrament, where you will find serenity, spiritual strength, holiness, and joy.